WordPress 5.0 named after Cuban Jazz musician Bebo Valdés has been released last Thursday, December 6th, after a somewhat abrupt announcement of the final release date. Just shy of being the biggest release period between two major versions, 5.0 brings with it rather few changes, but one of them packs quite a punch by overhauling the cornerstone of WordPress itself, the text editor. Keep reading to learn more about what’s new in WordPress 5.0. 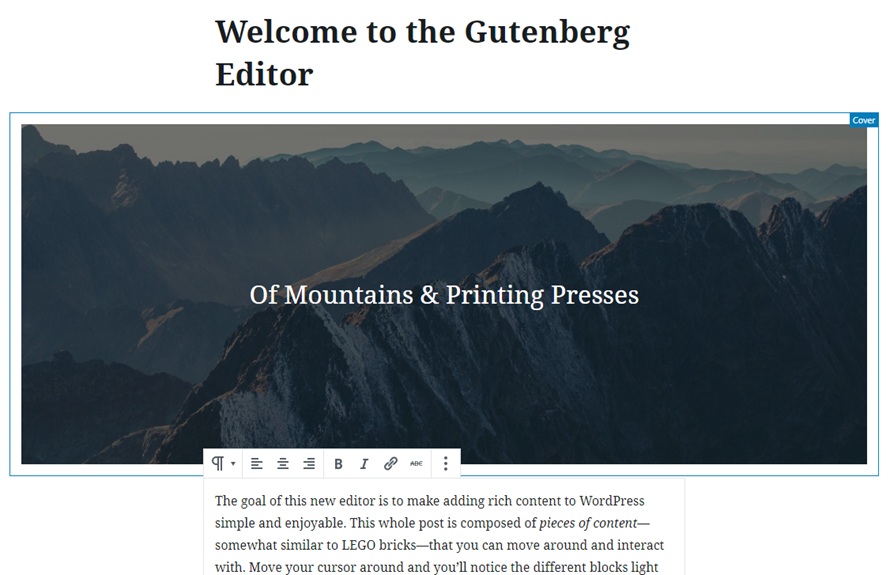 By far the biggest and most important change WordPress 5.0 brings is the new block editor. Developed under the project name Gutenberg the block editor aims to make content creation in WordPress more streamlined and bring the whole project a step closer to the drag & drop site building experience used rather successfully by its competitors for quite some time now.

Truth be told a revamp of WordPress’ content creating experience was long overdue. The visual & text editors we had up to now, and all loved to hate, where barely sufficient in the modern web era. Using these editors to create and format text was a chore for the initiated and quite the burden for the ones not familiar with its quirks. Most of the time editors had to rely on third party plugins or even page builders to be able to get a relatively smooth experience when creating content.

How does it work

The new editor treats all content creation elements, such as headings, paragraphs, images, galleries, embeds etc as blocks, allowing the user to easily place them in the content area, format them and customize their appearance. Drag & drop is also available providing easy restructuring of the content without the need of finicky copy pasting as in the previous editor. 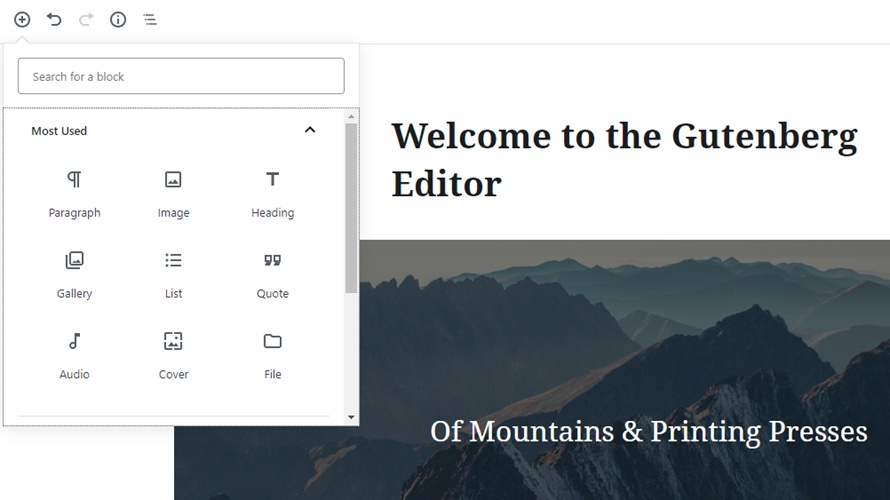 By default all common elements are bundled with the editor, everything from paragraphs, images, lists, quotes, buttons, columns, spacers, separators, all kinds of embeds and more are ready to use. They can be easily added by clicking the + button on the top toolbar or even directly added between existing blocks.

Formatting a block is pretty easy as well. Major formatting options such as alignment, font-weight, adding links etc is located just above the block eliminating the need to scroll. Changing the background and text colors of a block is easily done in the editor’s sidebar, just a couple of clicks and you are good to go.

Blocks can also be saved in order to be used later, if you need a certain list, or image with the appropriate formatting in many pages across your site you no longer have to copy/paste it, just save as a reusable block and add it wherever it’s needed.

All in all the new block editor is a big improvement on the existing one and will make the life of new content creators easier. Is it perfect? No, not even close, there are many issues left to be resolved, you can keep track of them here. Some things are still unintuitive the community has submitted a lot of feedback, which the core team will take into consideration and try to make the editor more user friendly. The Gutenberg project is an ambitious one which can potentially make or break WordPress, hopefully the former. Phase 2 is already on the way which will bring the block editor outside the post’s content, in menus, widgetized areas and even the customizer.

WordPress’ two major updates per year release cycle is going to change from 5.0 going forward. We’re now to expect two minor releases per month and we’re also going to see bigger changes happening at once instead of incrementally.

Along with the latest WordPress version the latest default theme, Twenty Nineteen was released which boasts full block editor support making sure that what the user sees when they are creating content is exactly what they will see once they publish their post.

What about if you don’t want to switch to the block editor yet, but still want to get all the bug & security fixes that come with the latest version? Don’t worry, there’s a plugin for this!

If you haven’t yet updated to 5.0 you can install and activate the Classic Editor plugin and then proceed with the update.

If you have already updated to WordPress 5.0 don’t worry. Existing content won’t be converted to blocks automatically. To continue using the classic editor, just install and activate the plugin mentioned above and you are good to go.

Keep in mind that this is not a permanent solution, the Classic Editor plugin will officially be supported until December 31st 2021. It would be beneficial to start playing around with the new editor in order to be able to make the transition sooner or later.

Within the first 24 hours after the release of WordPress 5.0 our team has released more than 80 theme updates to make sure that the update will be smooth if you are using one of our themes. Head on to our downloads section to get the latest version of your favorite theme, update and start creating content with the new editor!

If you have any theme related trouble with the new update you can easily reach us via our support hub, drop us a line and we’ll help you sort things out.

Use the coupon code WINTERSALE and save 30% OFF! Buy Now